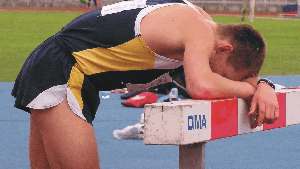 Are you watching the Beijing Olympics? Assuming you can see it through the smog. Well, I am boycotting the Olympics this year, for the reason I reckon everyone is – it’s boring as fuck. Who the hell wants to waste precious time watching drug-addled idiots running around in the blazing heat? I can do that at my local park for free. Ten gazillion dollars spent on two weeks of flag waving, blisters and lycra rash. What a waste of money.

However, if the Olympics bosses introduced these exciting sports I may be interested… 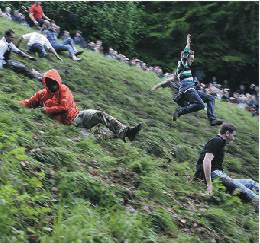 Cheese Rolling – This ancient sport involves a large round cheese, a hill and some drunk people. Simply roll the cheese down the hill. The winner is the drunk who manages to beat the cheese to the finish by throwing themselves down the hill after it.

I’m sure there are hills in Beijing, so construction costs = $0. I’m not sure if they have large cheese in China, maybe the Dutch team can bring some.

Dressing Up Race – This would liven up the 1500 metres no end. Runners would have to stop every 100m and add a layer of clothing – a feather boa, frilly dress or large floppy hat. Maybe they could have a theme like Gay Parade or ABBA Tribute. It would add a dash of colour and in no way demean the athletes and their sport. Hurdles in Heels? Long Jump in Rubber? The possibilities are endless. 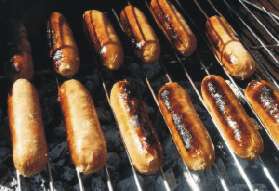 Men’s Triathlon – Never mind running, swimming and whatever the other thing is, I propose three REAL tests to sort the men from the boys – beer drinking, Marmite wrestling and barbequing. Who can drink the most, defeat his opponent in a bought of sticky yeast extract tussling then cook a plate of plump sausages to perfection?

I ‘m sure the Australians would do well at this, although they’d probably moan about wanting to use Vegemite instead of Marmite. Sorry fellas, rules are rules.

Women’s Triathlon – Waxing, Mojitos and Shoes. I think I could represent Canada in this sport, although I am no good at shoes. Or waxing.

‘High’ Jump – No pole, no landing mat, just a large spliff and the will to succeed. A plate of Gummy Worms and Cheetos could be dangled from a crane as an incentive to the giggling competitors to jump even higher!

I’m not sure if they have drugs in China, maybe the Dutch team can bring some.

Men’s Nude Hockey – That is something I would like to see. Just saying.

I am writing to the International Olympic Committee right now with my suggestions, I’m sure they’ll be thrilled to add them to the London 2012 Olympics. But first, I’m going to lie down and think about the men’s hockey a bit more…