The other day, my tummy started making noises. It rumbled. It made a horrible, gargling noise that sounded like a dwarf being flushed down a toilet. I assumed I must be hungry, but no amount of potato chips or beer seemed to pacify my gurgling gut.

I decided to scour the Internet for information on my minor, if irritating, condition. It was probably just gas, or too much beer, or that moldy bean burrito I should have thrown away but ate after I’d scraped the green stuff off.

I trawled cyberspace for medical blogs, message boards, and self-diagnosis forums. According to my online diagnosis, my symptoms pointed to one obvious condition. It wasn’t caused by green burritos. Or eating the wrong flavour potato chips. Or consuming vast quantities of alcohol. No, that grumbling sound was the terrifying roar of GUT WORMS. Hungry, angry, 6ft-long bowel beasts. No question about it.

According to my Internet research, we are all at risk, as gut worms are very easy to catch – you can pick them up by touching an infected person, sharing a cab, or attending a KISS concert. In fact, everyone’s insides are probably crawling with huge, squirming parasites that are slowly eating our brains and sucking the very life out of our bodies.

So, next time you hear that familiar growl deep inside your belly, you’ll know what it is. It’s a very hungry gutapillar. Throw it a donut and it won’t eat your brain.

It’s true! It said so on the Internet.

Hunters – do you have piles of dead deer blocking up your lodge entrance? Devoid of ideas on what to do with your bloodied bounty? All stuffed out with the Do-It-Yourself Taxidermy kit? Thank goodness someone has created this fabulous DVD packed with ideas to – yes – process that deer!

Featuring step-by-step instructions from leading deer processing experts Monty O’Drizzle and his assistant Bob Nutter, you too can get that decaying deer cut and shut before sundown!

* Slash, slice and dice with confidence as you transform your bucket of buck into a bountiful feast of burgers, pies and sausages. You’ll be such a culinary hit even your tree-sucking vegetarian friends will be gorging on bloody steaks in no time!

* Monty and Bob demonstrate 101 uses for a deceased doe and create accessories for your truck and trailer, stunning costume jewellery, a children’s bouncy castle and a replica of the late Charlton Heston!

* Beaver BBQ Blow Out
* Black Bear to Biofuel In Three Easy Steps
* You Hit The Cat, Now What?

So grab your rifle and get blasting! 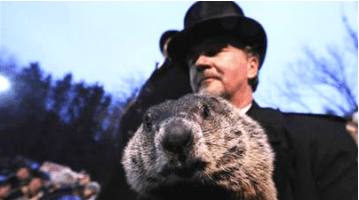 “Welcome all to Rivertown’s annual Groundhog Day!” beamed the Master of Ceremonies, tipping his top hat to the shivering crowd. “Mister Mayor, please bring forth the star of the show – Rivertown Ricky!”

The Mayor stumbled onto the rickety stage, clutching the groundhog in a tight grip. “If this little bastard pees or bites I’m dropping him,” the Mayor snarled through a gritted smile.

The Master doffed his hat to the little creature, and unfurled a paper scroll. “Ladies and gentlemen, boys and girls! And the nice lady from Channel 5 News!” He paused and smiled at the television camera hovering below the stage. “Behold Rivertown Ricky’s annual weather prediction!”

“Well, let’s see. Hmmm.” The Master paused and frowned at the paper.

“Ladies and gentlemen, it seems little Ricky is playing games with us this year. His message reads:

Forget the winter chill and cold,
There is a story to be told
When blood and fire will embrace
The greedy wanton human race
Your heart will beat and roar and clatter
Your head shall shatter with a splatter
And then the Earth will return once more
To all the creatures that came before.

p.s. It’s going to be very hot… where you are all going.

The crowd muttered in disbelief. The Mayor glared across the stage at Bob, the committee’s scribe. He shrugged his shoulders and rolled his eyes.

“Ladies and gentlemen, it looks like some prankster has been tampering with our friend’s prediction. I’m sure there’s nothing to worry about! Just a bit of fun…” reassured the Master, as he hastily bundled the Mayor and Rivertown Ricky off the stage.

“What a screw up!” cried the Mayor as he picked groundhog hairs from his jacket. “A poem about blood and exploding heads, and in front of all those kiddies! What the hell were you thinking, Bob?”

“I didn’t write that!” protested Bob. “I put my poem in Ricky’s cage this morning. The scroll must have been switched. Sandra was looking after him all morning…”

“Don’t blame me!” shouted Sandra. “I only left him for a few moments while I went to top up his water. How could you think it was me?”

The bickering was interrupted by the shrill ring of the telephone. “Mister Mayor, The river’s turned red!” shouted an excited voice down the line.

A deep red torrent gushed before the Mayor as he stood on the riverbank. He bent down and poked his hand into the water. A sticky crimson film clung to his fingers. Must be paint or something. Polluting little bastards.

A gaggle of TV crews had assembled at the water’s edge. A microphone was shoved in the Mayor’s face.

“Mister Mayor, is this sabotage? Or do you think there are sinister undertones to your groundhog’s predictions?” “Nothing to worry about,” began the Mayor. “The police are onto the pranksters I’m sure…” his voice trailed off and his eyes began to sparkle. “But, obviously there is the possibility that Rivertown Ricky is trying to tell us something…”

The mayor stared into the camera. “This is quite a mystery. A newsworthy event for our little town. I’m sure this story will be attracting a lot of attention from the world’s media…”

The Mayor assembled the committee in his office. His mood was somewhat lighter than before.

“Rivertown is all over the television! Even CNN! Knocked those other mangy groundhogs right off the news. Although let me be clear, whoever poured that red crap into the river is going to be severely punished. But in the meantime, let’s try and keep this little prank going, eh?”

“The press wants to see the groundhog, Mister Mayor,” remarked the Master. “But Sandra said he’s a bit frightened of the camera lights, so maybe we should let him rest for now.”

“Goodness no! Get that hairy little bastard in front of the cameras! Give it a carrot, or whatever it eats, and give the press what they want. No time to waste!”

The phone on the Mayor’s desk rang. The Master picked it up.

“Mayor’s office. Yes…what? How could it? That’s impossible…” the Master stared at the committee members in frozen silence. “That was the Chief down at the fire station. He says the whole of Woodside Park is ablaze. He says it’s like a bush fire, homes gone and everything. But it’s minus four outside! How can it…?”

The Mayor shook his head. Bloody pranksters were taking it too far now.

“Holy God, we’ve got a town crawling with press now. Evacuate the town. And when I find out which little bastards have done this…” he flopped down on his seat and shut his eyes.

Groundhogs don’t know much about the weather. But they can smell Armageddon a mile away. 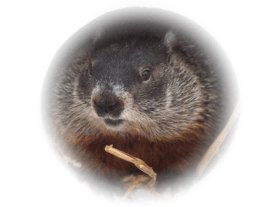 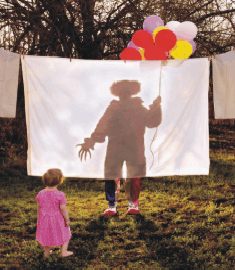 An illness. Symptoms include big red nose, large pants and a strong urge to destroy innocent young lives with balloon animals. Ask yourself:

– Is falling over in a pair of oversize shoes amusing?

– Does a car that falls apart (that isn’t a Hyundai) tickle your funny bone?

– Has a clown ever done anything that made you laugh and feel happy inside?

– Have you ever hired one of these reprobates to traumatize small children at birthday parties?

If you answer ‘yes’ to any of these questions, you really ought to be ashamed of yourself. Ashamed.

Don’t forget nasty serial killer John Wayne Gacey used to dress up as a clown when he wasn’t out slashing and hacking. And he probably had balloons too. Don’t say I didn’t warn you.