As you know, nothing makes me angry. “Where are the rants, screaming and violent rage?” you often complain. I’m not capable of hateful thoughts, so my new guest poster, Lunenburg County Bugler’s star columnist Eddie McMayonnaise has volunteered to share his thoughts on things that make him want to smash things. Over to you, Eddie.

“Oooh, I’m So ANGRY!” About Television!

I love television! It’s a great way to avoid talking to Mrs McMayo, who is quite the most tedious company. But do you know what makes an even worse sound than Mrs McMayo – that’s right, the television!

Why do computers on TV shows like CSI: Las Vegas make lots of noise? Does your computer bleep and twitter every time you press a key? Mine just goes ‘ping!’ and crashes. Why is Gil Grissom’s computer better than mine? How come it takes five seconds for his computer to descramble a blurred CCTV image of a suspect, match his face to his fingerprints, detail his entire criminal record and alert a SWAT team to the dumpster he’s hiding in? In five seconds my computer is still wondering if it feels like opening Firefox. Bah! 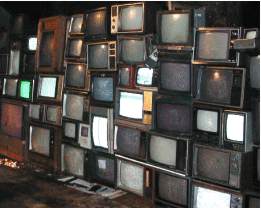 Why do sounds sound different on TV? Not just computers, but fights. When a burly cop inexplicably downs all weapons and punches the bad guy, we hear this really impressive “Phhhhhwwwattt” as the baddie’s teeth disappear down his throat. When I punch someone, I just hear the gentle click of my fingers dislocating. Bugger!

How come on TV when two people are having sex, they don’t shout out stupid things as they climax, or giggle nervously and make squelching noises like everyone else? How come no-one ever falls out of bed, comes too soon or shouts “Gross! Suck it yourself, you perverted freak!” like everyone else?

And afterwards they just get out of bed, slip on their clothes and go for a coffee. They don’t clumsily search for Kleenex or fumble about with sloppy condoms. Why aren’t they sticky?

Ohhhh, the TV makes me angry now! I’m off to kick a charity worker. Toodeloo!