What price glory, eh? Several atheletes at the Beijing Olympics were stripped of their medals after positive drugs tests. And for what? A metal disc and a trip around their hometown on an open-top bus. Drugs in sport are wrong! But supposing they were alright? Some sports could positively benefit from a shot of something…

Caffeinated Golf – The utterly dull ‘sport’ of golf could be livened up instantly by priming the dreary competitors with double espressos and energy drinks before play. Imagine the speed a game would be finished in as the hyper hitters tremble their way to the 18th hole!

No need for golf carts as competitors race around the green like retarded rabbits. 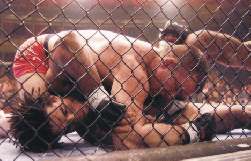 High Cage Fighting – Like most people, I enjoy watching near-naked sweaty men rolling around on the floor. However cage fighting can get rather violent and bloody. Where’s the love, guys?

I propose a much gentler version of the sport, where both musclemen smoke a giant spliff before combat. We will instead be treated to the sight of near-naked sweaty men rolling around on the floor, giggling and shouting “Dude! I love you!” “No I love you more!” A sure-fire hit with ladies and the gay community.

Drunk Javelin – Make sure the competitors are tanked up to the tank tops, give them a huge pointed spear and point them in the general direction of the target. Watch those javelins fly!

This could be the ultimate in audience participation sport, as the crowd will have to keep a keen eye on the direction of those mighty arrows. 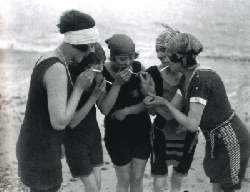 500m Nicotine Back Stroke – To brighten up tedious swimming races, all competitors have to swim with a lit cigarette dangling from their mouths.

The swimmers must keep puffing away until the finish – an unlit soggy butt will mean elimination! Just think of the sponsorship possibilities for Marlboro.

Running – All runners should be allowed to take as many steroids as their bodies can handle. Races will be run in the shortest time possible – the 1500m will be over in a matter of seconds!

In that way, the Olympics will be over a lot sooner and won’t junk up the TV schedules all summer.

I’m thinking maybe LSD Formula 1 and potato vodka skydiving are non-starters, and any sport involving bullets should perhaps retain their drug-free policy. Are there any sports you would want livened up by a lychee martini or two? Tell Tiggy!

Their manly muscles are steroid-free over at Humor-Blogs.com