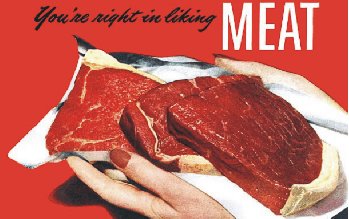 It’s time for another Meat Beat with the Prince of Pork, Monty O’Drizzle!

Monty: Howdy, Tiggy fans! Now, me and Bobby don’t wanna get all riled up about other people’s eatins’. We know a lot of the internet folk and Tiggyblog fans are them homosexual liberal vegan types, and we respect that, hey? Jus’ don’t start invitin’ us to your parties or nuthin’, no offense. And the more vegans they is, the more meat fer us! Kinda works out, hey?

But I would like to talk to yous about foods that are just not right, see? They just ain’t men’s food. I mean, you ladies can eat them jus’ fine, and we know better than to tell you little ladies what to do, hey Bob?

Bob: Yes Monty, sometimes ladies take us the wrong way, don’t they? Like the nice lady you took out for dinner, but she didn’t realize she’d have to gut the main course herself.

Monty: Holy heck, all that cryin’ and screamin’ sure put me off a lady’s company, fer sure! Anyway Bobby, about this nasty food stuff we warnin’ the nice people about. This is our list of foods you shouldn’t be puttin’ in yer mouth. 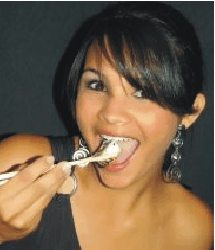 1. SUSHI
Bob: Monty and I don’t have anything against fish, of course! There’s nothing better than spearing a salmon or wrestling a swordfish for the grill. But we both agree that sushi is just… well…

Monty: Lady food, Bob, that’s what I’m sayin’! It’s all pretty colours and all itty bitty. And they want you to eat it with lil sticks! What the hell is that about? Them crazy Chinese.

Bob: Monty, the Japanese have a long history of sushi-making, it’s a very delicate art.

Monty: Art, Bobby-boy? Ya don’t fill yous belly with art! I’d have to eat five hundred of them piddy-tiddy things just for starters. And if yous wanna eat raw, there’s nuthin’ finer than the insides of a freshly-shot deer. You try eatin’ that with fiddly lil sticks, hey?

2. TABOULI
Monty: Bobby, I have no idea in holy hell what a tabouli is. Is it like some kinda moose?

Monty: Then I ain’t interested. Is it some kinda squirrel?

Monty: Then I ain’t interested. Does a tabouli have a look a fear in his eyes as he sees yous aiming fer his heart?

Bob: No Monty, tabouli is a mix of bulgar wheat, parsley and spices. It’s like a salad.

Monty: Holy heck Bob, don’t let that salad stuff near me. Might turn me all homosexual, like my brother Mike. He’s a big homosexual, but he sure loves his meat, so he’s all right with us, hey? Our momma was not happy when she found out about Mike likin’ them hairy sailor types that…

Bob: Anyway Monty, maybe we should look at the next item on our grocery blacklist. 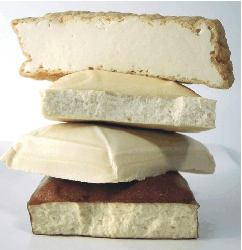 3. TOFU
Monty: Now, I’m not one to go swearin’ in polite company, but what the freakin’ hell is tofu for? Tiggy says it’s a good meat replacement. Did ya hear that, Bob? Meat replacement? I don’t think I even understand what them two words mean together.

Bob: Some people substitute tofu for meat in their diets when they are trying to lose weight, Monty.

Monty: Why the hell you wanna go lose weight? There’s nothin’ finer a big meaty man, that’s what men should be like, hey? And Mike would agree on that too.

All you obese Tiggyblog fans out there, you takes my advice and get yerself a huntin’ bow. You’ll get some good exercise runnin’ round the forests chasin’ and killin’ some nice healthy food.

4. TEMPEH
Monty: Bob, are you makin’ this stuff up? That’s not a food, that’s some place in Florida! Man, yous been breathin’ them fumes from the barbecue. 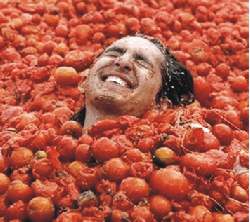 5. TOMATO
Monty: Now, red is a nice colour when it’s seepin’ outta a fresh kill. But you don’t wanna be go puttin’ them big red tomatoes in your mouth! You know how they grow them? And I wanna apologize to the ladies here, but let me be candid bout this – they grow them outta a big pile of shit! Yep, you heard straight! Poop!

And we don’t like poop, do we Bob? Ya can’t eat poop, not even if you barbecue it. We tried it once, but it weren’t so good.

Bob: No Monty, the only acceptable way to eat tomato is in tomato ketchup. No barbecue party is complete without it.

Monty: Not me, Bob, I ain’t touchin’ tomato ketchup! I’ll just have the regular ketchup thank you.

Bob: But Monty, ketchup is…

Monty: That’s enough yappin’ Bob. Now, y’all noticed a lot of nasty food starts with the letter ‘T’? That’s somethin’ to be aware of next time yous in the grocery store. Jus’ avoid all food products startin’ with the T. Jus’ to be safe, hey?

Bob: What about turkey?

Monty: Oh yeah, turkey. But that’s kinda like a big ugly chicken, so you okay with that.

Monty: Yeah, technically they begin with ‘T’s but, oh, Bob, jus shut yer shute and fire up the grill, hey? I’m gonna strap on some steaks and exorcise them tofu things from my mind.

Bob: You mean ‘slap on’ some steaks, Monty?

Monty: Sure I do Bob, that’s what I jus’ said! See y’all next time folks… an’ watch out for them taboulis!