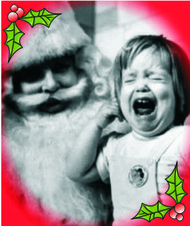 Get into the holiday spirit with Tiggy this month! Every Tuesday Tiggy will be posting a festive feature to celebrate this most magical of seasons:

* Rainbow Princess has been busy composing a beautiful viral e-mail poem to get us into the spirit of the season! Hopefully it will be less homoerotic than her last effort.

* Those cute kids from Mrs. Davies’ class will be sharing their Letters to Santa!

* Monty O’Drizzle and Bob Nutter will be downing weapons to share some Yuletide Hunting Tips!

* And finally, an end of the year TiggyPops Quiz to tax your drink and drug addled holiday brains!

It’s almost as exciting as a holy virgin birth! But not quite.

If you’ve ever asked yourself these questions, you will need a copy of It’s The Stuff That Comes Out Of My Brain, a fun-filled compilation of weird observations, strange-but-not-true facts and hilarious stories that will leave you with a warm fuzzy feeling inside. And a bit of a headache.

It’s The Stuff That Comes Out Of My Brain includes Tiggy’s best ever stories and musings (with all the spellings done right and everything), plus a whole bunch of new and never-seen-before anecdotes, tall tales and drunken drivel!

And it’s coming soon! Well, as soon as Tiggy stops playing on the internet and bloody well gets on with it.

To express your immense excitement and sign up for alerts, send Tiggy an e-mail! 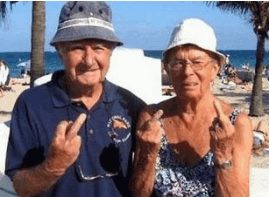 I’m looking forward to being old. Life so far has not been as exciting as I hoped. I was too weird to have enjoyed a flirtatious carefree youth and I’m spending most my adult life sitting in traffic queues and being thrown out of cocktail bars. I’ve decided my twilight years are going to be the best of my (fast diminishing) life. I’ve only got 50 years to wait! Well, 45. All right, maybe closer to 40. Bugger.

I hope my family dumps me at the doorstep of the local seniors’ home the day I reach admission age. Senior homes may be like prisons with flowery curtains, but think of the benefits! Three square meals a day, lots of TV to watch and uniformed helpers to cater to your every need.

I imagine by the time I’m old they will have senior homes in space – Heaven’s waiting room in the heavens. Being weightless will help us old folk move around easily and I’m sure the boffins will have invented some sort of magic space lemonade to keep us fit and regular.

Me and my old-timer chums can float around the TV lounge all day watching remastered 3D holographic movies from the old days. We’ll hovver around sucking Werther’s Original Magic Mushrooms (drugs will of course be legal by then) and watch classics like SAW IIV and Debbie Does Denmark.

Hopefully boffins will have invented an interactive virtual reality pod too. We can indulge our fantasies and have some senior sexy time with holographic stars. Oohh virtual George Clooney, just wait until I get out of this prosthetic brace and we’ll have some fun! 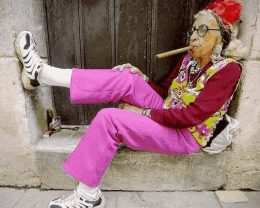 Pumped up on magic space lemonade and as many Werthers Originals we can get our wrinkly hands on, life will be one big senior home house party (at least until bedtime at 7pm).

Old Mr. Jay-Z Johnson in his pimped out wheelchair can provide entertainment with ditties from the good old days. “Oh, ma bitch! Ma Ho! Shake ur Ass, bitch!” he will croak as his blinging gold false teeth rattle inside his bony head.

Maybe devilish geriatrics Mr. Rose and Mr. Slash will wake from their afternoon naps and treat us to some old-fashioned guitar shredding and arthritic-foot-tapping rock tunes. As long as they keep the noise down.

We have nothing to fear from old age! It’s going to be a fogey-fest of liquid meals, happy pills and moaning about how today’s youth don’t know they’re born, the old days were much better. First one to the stair lift gets a go with Virtual George! 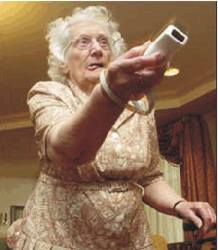 Santa is a bastard! He didn’t bring me a Nintendo Wii for Christmas. Come on Santa, how many begging letters to the North Pole do I need to send before I get one? It cost me a fortune in stamps, and now the lady at the Post Office thinks I’m weird.

How else can I work off all that holiday booze, other than by jiggling in front of the TV waving around a plastic wand?

Pining for a Wii got me thinking about all the fab games I won’t be playing this year. I’ve also come up with a few game ideas of my own. How much would all you Wii fans want to play the following games? A lot much, I reckon!

Snow Shovel Star 2009 – Relive all the fun of a sub-zero whiteout! Select your spade and get ready for hours of back-breaking shoveling fun! Plough your way through levels including Appalachian Avalanche, Dig Out the Car before the Wife Gives Birth, and Springtime in Winnipeg! Great snow shoveling practice for Dad!

Kozy Knitting Korner – You’ll knot want to put down your Wireless Knitting Needles with this awesome craft game! Knit virtual sweaters, socks and fluffy gifts for all the family. It’s not a complete waste of time at all! Coming soon – World of LoomCraft and Potter’s Wheel for Wii!

Espresso A Go-Go – Realize your barista dreams with your own virtual percolator! Use your wand to select your beans, grind them to perfection, then fill your coffee machine and watch it brew! Obviously you can’t drink the coffee as it’s pretend. 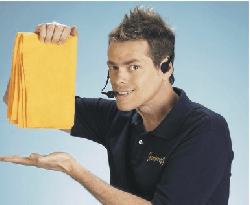 ShamWow Mansion – The most absorbent game you’ll ever play! Using the WiiWow Virtual Miracle Cloth, race around ShamWow Mansion clearing up cola, pet stains and vomit before That Guy With The Headset catches you and kills you with his Weapon of Mass Absorption!
If you’re not saying “Wow!” by the end of this game, you must be fucked in the head or something!

Busker Bum – It’s like Guitar Hero for the homeless! Busk and beg for money on the mean streets of Wiiville. Can you make enough money to buy your next wrap of heroin or bottle of meths? Will your audience be throwing you bucks – or buttons? Don’t forget to watch out for violent cops, drunken tramps and overpriced hookers!

Go On, Poke It With A Stick – Ewww, what’s that? Probe and prod for hours with your Virtual Poking Stick! Jab your way through squishy adventures including Roadkill Alley, Poo Bar and This Looks Like a Job For CSI. Icky!

I’m off to copyright these game ideas right now. If I ever get my hands a flamin’ Wii before I die of old age, I promise to dedicate all my productive time to mopping up at ShamWow Mansion. Game on!