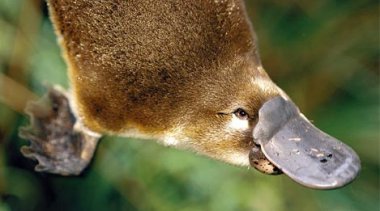 Some readers have asked me to expand slightly on an incident I alluded to in a previous post. I didn’t really want to bring the whole thing up again. But yes, there was a police chase, yes, it was through a zoo, yes, I ruined a small child’s birthday party, but in fairness I did return the platypus. No big deal, let’s not dwell.

But you know, during those dark hours holed up in the Aquarium, I spent my time thinking about the sea and lakes and rivers, and all the stuff that’s in them. And how damn ugly most of it is.

I mean, think about a seahorse. At first glance you might say it’s cute, like a bony horse’s head with no body, and little wings and a curly tail… but wait, that’s not cute, that’s something out of a horror flick! Bodyless floating horse skeletons? I don’t wish to swim about with that, thank you very much. Everything that lives underwater is weird and is dangerous. Jellyfish, sea urchins, electric eels, lobster thermidors – these are scary creatures that would happily slice, sting or zap you to death if they had a chance.

You don’t find this sort of ugliness on land. For instance, puppies, sheep and hedgehogs are cuddly and fluffy, and don’t squirt you in the face with ink when you lick them. Nature has decreed that all the gross stuff lives underwater where it can’t offend our eyes, and all the cute stuff stays on terra firma. Nothing should mess with that. And what happens if these two worlds dare to collide? You end up with a PLATYPUS. I mean, what the fuck is up with that thing?

So that’s why I needed a platypus – to make a point. I just hope the jury sees it my way. 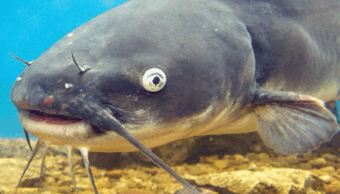 You think you’re having a bad day? Maybe you got to work hoping for a peaceful day surfing the internet, but your boss slapped a pile of work on your desk that will last you until retirement.

Worse than that? Maybe your Aunt Lucy’s life support machine was switched off by mistake. Before she’d changed her Will to leave you a million bucks. That’s bad.

Worse still? You ran over Aunt Lucy’s cat, got fired from your job for spending all day surfing the internet, then got hit by a truck and are now hooked up to life support. That’s pretty bad.

But it could be worse. You could be Sam the Catfish. This is his lousy day story.

I’m watching a TV documentary about some dicks going fishing in a lake in Brazil. These two idiots are chucking in their line or whatever the angling term is, when one of them gets a bite. He excitedly yanks out the line to reveal a wriggling, angry catfish! I’ll call him Sam. I’m not sure if his name really is Sam, but it seems like a good name for a catfish. Anyway, poor Sam is struggling on the line. A bad day for a fish, you think. But get this – half of Sam’s body is missing! The lake is full of fuckin’ piranhas, and Sam’s the lunchtime sushi special!

“Oh dear,” chuckles one of the fishing dicks. “Looks like our supper’s already half eaten!” Poor Sam is half the fish he was this morning, and these guys think it’s funny! But at least Sam has escaped the piranhas…

“Thank goodness!” thinks Sam. “I’ve been rescued from that vicious mob of fish! There is a God after all… ohhhh… uhhhh… where am I…can’t breathe… no… water… oh no… fish dicks!!!”
Not only is Sam suffocating to death, he is also about to get his head smashed in and served for supper. His bad day can’t get any worse, can it?

That is what you call having a bad day.