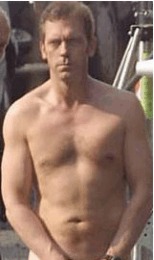 The time has come, dear readers, for me to share my Hugh Laurie anecdote. When I was 15, me and my friend Sarah saw him NAKED. Well… ok, he was wearing underpants. But they were very tight underpants.

Beads of sweat trickled down Hugh’s manly chest and his sky-blue eyes glistened in the gloom.
“Oh, Hugh!” I sighed.
“Come here, big boy!” drooled Sarah
“Oooooh!” swooned the other 1,200 people sitting in the theatre.

Well… ok, we were watching Hugh in a West End play. Maybe not the intimate encounter I would have liked, but at least Sarah and I had the best seats in the house! We were so close to the stage we could practically lick him. I’m sure Hugh could feel the love emanating from our hot young bodies as he bound towards us in all his manly glory.

Hugh performing on stage in his smalls was, for us, the female equivalent of visiting a strip club. We learned a lot about the wonder of womanhood that afternoon, I tell you! Mmmm, damp.
Mr. Laurie has a new legion of female fans since House took over every TV channel in the galaxy. Maybe it’s just me, but sometimes I forget the good doctor is a fictional character… 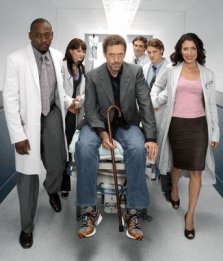 Unfortunately, by the time you’re laying on the examination table with your naked bum in the air, you remember Dr. House isn’t real. Instead, you end up getting prodded by a burly Russian with a white coat and hairy hands, who studied medicine while awaiting his murder trial. There’s no House in this doctor.

Just me then? Oh well. At least I didn’t have Lupus.