The last time I played tag I was seven and ended up losing two teeth. Happily, Sandie over at the delectable Quirky Musings of a Loony Mama has decided I’m “It” and has tagged me without using violence or stealing my lunch money. She has decreed that I must reveal six facts about myself. And I can’t make things up like I normally do.

1. The music of Beethoven makes me nervous. I used to play the cello when I was a kid. The huge instrument was odd choice for a tiny tot like myself; when my music teacher asked the class if anyone wanted to learn the cello I just said yes. I had no idea what a cello was. I assumed it was a tiny flute or something. 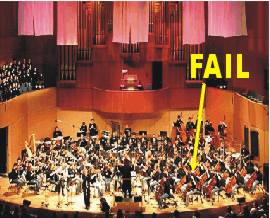 I joined a youth orchestra and spent my weekends playing concerts in musty town halls. The highlight of our season was the Christmas Gala performance at the swanky city concert hall.
On the night of the great performance, our conductor greeted the packed hall and announced that the first treat of the evening was Beethoven’s 3rd Symphony.

Beethoven’s WHAT? I’d never heard of it! I had been off for a week with flu; the bastards must have practiced it while I was away. I glanced at my fellow musicians who were calmly putting their music scores on the stands. I didn’t even have a copy!

I had to spend the next hour miming to Beethoven in front of 5,000 people.

2. I don’t have a favourite day of the week. They all kinda suck in their own way. 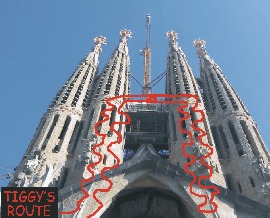 3. I don’t like heights. My worst vertigo nightmare was at the Sagrada Familia church in Barcelona. I’d bravely decided to climb the stairs of the spire, but ten steps up the narrow spiral staircase I decided I’d seen quite enough. Unfortunately a group of German tourists suddenly pushed their way behind me; there was no chance of escape. The only way was up, up, up, up…

The only way out of that cursed church was to cross the tiny bridge between the two spires (which I estimated was at 15,000ft) and descend the staircase of the other tower. Shaking and sweating for over an hour, I finally clambered my way to the bottom of the staircase. Freedom!

But the door at the bottom of the staircase was LOCKED!

A chubby German tourist grabbed my arm and chirped “Nein, ve cannot get out zees way! Ve must go back the vay ve came!” and dragged me all the way back up. 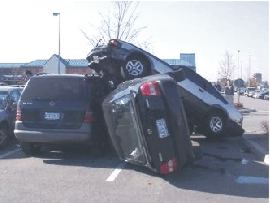 4. I can’t drive. No, that’s not true. I can drive, just not in a way that is acceptable to everyone else on the road. I like to travel at 100 miles an hour everywhere, especially in school zones (the kids think it’s cool). I ease into tight parking spots by nudging other cars out the way. I often forget I am supposed to wear my glasses until halfway through the trip. I like slamming on the brakes and making the tires squeal, especially in school zones.

5. I’m a famous movie star (well, in my street anyway). My movie extra career has taken off since my recent movie appearance as “Princess” the pasty redhead executive. The back of my head is featuring in Tom Selleck’s latest flick, and last week I played an East Indian refugee (I had to spend quite a long time in makeup for that role). I’m very versatile. And more importantly, I’m very cheap.

6. My first ever word was “bap”. I was trying to say “The cat keeps sitting on my face” but it just wasn’t coming out right.

Well, that’s my six totally-not-made-up facts. According to the rules of the game, I’m supposed to tag six more blogs. Unfortunately, since I’m the second-to-last person in the world to get tagged, everyone else has had a go.

So stuff the rules, folks! If you fancy posting your own ‘Six Amazing Facts’ on your own blog, website or even works notice board, here’s your invitation! Send me your link and I’ll feature you or send you a cake or something. It will probably be a feature rather than a cake. But you never know.

8 thoughts on “Tiggy Gets Tagged – Six Of The Best”